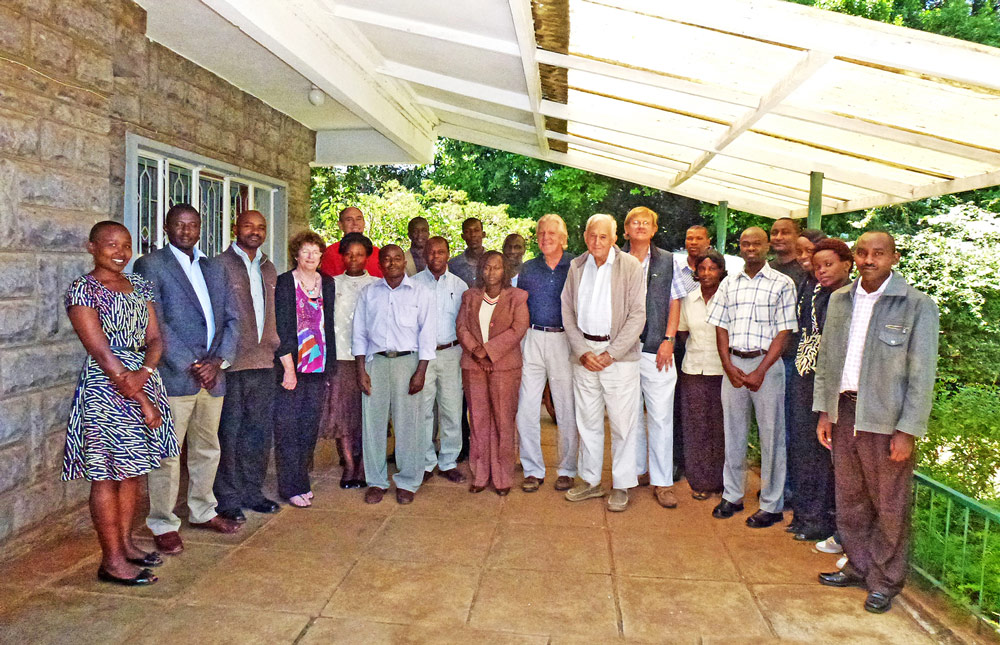 TARA Board together with staff, Nairobi, 2011.

David Coulson is an internationally recognised photographer and author of many books and articles about Africa’s cultural history and landscapes. His photographs have been exhibited in London, Rio de Janeiro, Johannesburg, Washington DC, Nairobi and Vancouver. David has worked as consultant to the United Nations Environment Programme, spearheading the 1999 Canon-sponsored international photographic competition on the Environment. His fifth book, African Rock Art, written in collaboration with Alec Campbell, was published in 2001. David has led TARA since he founded the Trust in 1996.

George Abungu is a Cambridge-trained archaeologist and former Director-General of the National Museums of Kenya. He is currently the founding Director of Okello Abungu Heritage Consultants, and Kenya’s Representative to the UNESCO World Heritage Committee. He is a visiting lecturer at a number of universities, including Gothenburg University, in Sweden, and the University of Western Cape in South Africa. Dr Abungu is also an advisor to the Global Heritage Fund, and sits on the panel of the World Monuments Watch.

Janette Deacon was born in Cape Town, where she attended school and went on to study Archaeology at the University of Cape Town. She was Secretary and member of Council of the Southern African Society for Quaternary Research, has been a member of council of the South African Museums Association and is a Member of the Board of the SAMA School of Conservation. She was a Vice President of the Pan-African Association for Prehistory and Related Studies. After her retirement from the National Monuments Council in 2000, she was appointed to the council of the South African Heritage Resources Agency (SAHRA) and she is also a member of the Western Cape Cultural Commission.

Thomas F. Hill has been recognised internationally for his leadership in the development and growth of interactive marketing, communication and new media. He is a co-founder and Chairman Emeritus of The Institute of Human Origins, a scientific research organization dedicated to the study of human evolution. Mr Hill is also a Founding Trustee of TARA and of the Pan-African Conservation Trust; he is a member of the Explorers Club (New York) and a fellow of the Royal Geographical (London).

Audax Mabulla received his PhD in Archaeology from the University Florida, USA. He is currently the Field Coordinator of the Archaeology Unit, University of Dar es Salaam (Tanzania). His major research interest is in the area of the Lake Eyasi Basin, where the present-day Hadza hunter-gatherers live, and where he has excavated major sites. Dr Mabulla is co-principle investigator at the Loiyangalani River Valley Site Archaeological project (Serengeti, Tanzania), and runs the African field school for the Associated Colleges of the Midwest, ACM. In addition to his scholarly research, he is an active champion of the land rights of the Hadza.

Sada Mire is a Somali born Swedish archaeologist, living and working in the UK and Somaliland. She studied archaeology and zoo-archaeology at Lund University and continued at the School of Oriental & African Studies (SOAS), University of London, for her B.A., and then at University College London (UCL) for her M.A. and Ph.D., conducting field research in Somaliland. Sada is currently advisor to and former Director of the Republic of Somaliland’s Department of Tourism & Archaeology, which she founded in 2007. She is founder and executive director of the Horn Heritage Organization. Sada is a Research Associate at SOAS, and  affiliated with also UEA and UCL. A TED-Speaker, she also serves as an editorial board member of the peer-reviewed journals African Archaeological Review, Heritage & Society and Southern African Archaeological Bulletin

Susannah Rouse is a dedicated conservationist who lives in Lewa, Kenya.

Victoria Waldock creates and utilises visual media to explore key socio-cultural and environmental concerns in Africa. Integrating commerce and education, she works in a variety of media ranging from contemporary digital technologies to ancient rock art. As a documentary filmmaker, she is perhaps best known for her work as producer for the (Emmy-nominated) Dying to Tell the Story, screened in 200 countries worldwide. As a media specialist she works with non-profit foundations, serves on several boards and is currently founder/curator for the SLC Film Center Africa Program. Born and raised in Kenya, Victoria holds a (Stanford) MA with a focus on Saharan rock art. She is currently reading for a PhD at Oxford, topic: Saharan rock art.