TARA’s mission is to create greater global awareness of the importance and endangered state of African rock art; survey and monitor rock art sites; serve as an information resource and archive; as well as promote and support rock art conservation measures. To achieve its mission, TARA has worked closely with communities in order to educate them about these ancient treasures.

TARA’s ‘Dawn of Imagination’ exhibition hosted at the Nairobi Museum in 2009 culminated in the design and implementation of a ‘Rock Art Studios’ education and outreach program that taught primary school learners about rock art and how to protect it. Since then, over one million people of all ages have visited Tara’s exhibitions in 12 different countries. 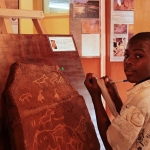 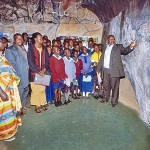 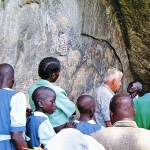 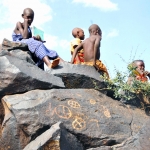 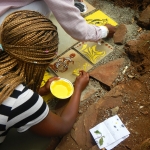 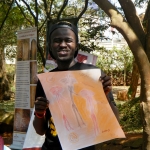 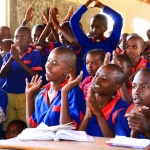 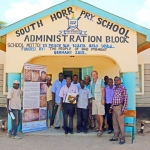 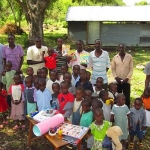 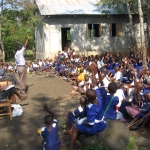 To its awareness activities, TARA has added a special focus on community education of peoples living in close proximity to rock art sites. The sites are managed by the community through the local clan system. Proceeds from entry fees are invested in community development interventions such as education, and administration as agreed between community members.

Connections between old and new …

Panoramas of hunting and war, enigmatic symbols, graceful images of animals loping across the savanna, ghostly handprints of people who lived long ago—ancient artists daubed millions of images like these across Africa, recording the world as they saw it. Today, it is common practice to generate income from visitors to cover the costs of site protection. Sustainable tourism and capacity building have become accepted strategies in the current rock art conservation paradigm.

Sustainability is more than economics, however. It includes social dynamics that involve all of the relevant people in decision making, as well as the development of appropriate conservation methods. The investment in people rather than in infrastructure, with the expectation that if enough people are aware of the fragility, meaning, and heritage values of the art, and are trained in the management and interpretation of rock art sites, it will be easier to ensure that best practice methods are implemented. The fact is that people will only care about the conservation of heritage places if they are aware of them.

Due to Africa’s extraordinary wealth of heritage rock art being at grave risk, TARA wishes to engineer proactive educational change. Every year more sites are damaged or lost due to development, vandalism, and natural causes. This is a concern because part of the record of human occupation, way of life, and belief systems is being expunged.

The launch of the new TARA website in February 2014 is intended to facilitate conservation awareness and act as a delivery vehicle offering website users a variety of resources from photographs, information on African rock art heritage to promotion of community projects and educational resources for teachers and learners.

Development of African rock art educational resource packs for teacher use in community schools under the auspices of TARA is planned from mid-2014 through 2015. Support of teachers and learners in schools close to rock art sites is envisaged through the running of cultural heritage programs. Youth are our future.

The use of Pinterest, for example, a new type of image-based social media that allows organisations such as TARA to easily share rock art interests and items that others may find interesting on the internet. TARA actively posts news on Facebook, Twitter and will be building its organization profile on Google+ in upcoming months. Through these communication channels, TARA hopes to expand its following audience and publicise its core business and global awareness campaigns.