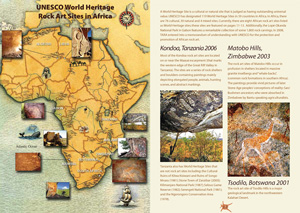 The rock art of the Tassili n’ Ajjer consists of paintings and rock engravings (preserved on a high, eroded plateau in the central Sahara Desert). The plateau is a spectacular lunar landscape of great geological interest. The art depicts herds of cattle and large wild animals (such as giraffes or elephants indicative of a time when the Sahara was humid and vibrant with human activities like hunting and dancing).

The Tadrart Acacus mountains contain thousands of cave paintings and engravings in different styles some dating from 12,000BP. Five different art phases are distinctive: naturalistic (Large Wild Fauna), Round Head, Pastoral, Horse, and Camel Periods. This art is a reflection of striking changes in climate and in flora and fauna. The paintings also provide a glimpse into different lifestyles of human societies that succeeded each other over time.

The Drakensberg is South Africa’s highest and most dramatic mountain range; it contains some of the most fascinating natural and archaeological areas in the sub continent. The mountain’s numerous rock painting sites present a significant component of cultural heritage left behind by San/Bushman people who lived there until the late 19th Century. The paintings are outstanding in quality and diversity of subject, and in their depiction of animals and humans.

The rock art site of Tsodilo Hills is a major geological landmark in the northwestern Kalahari Desert. The amazing quality and quantity of rock art, contained in a relatively small area, has earned the site the title of the “Louvre of the Desert”. The site is characterised by a wide variety of paintings on exposed rocks made mainly by Khoe pastoralists. “White-painting Shelter” has been periodically inhabited over 100,000 years, early Iron-Age villages and prehistoric mines set Tsodilo apart from other Southern African sites.

The Chongini rock art site is located within a cluster of forested granite hills on the high altitude plateau of central Malawi. The rock art consists almost entirely of schematic, white paintings (making it visually different from the more naturalistic, red hunter-gatherer images) in male and female initiation (as well as rain-making and funeral rites of Chewa agriculturalists).

Most of the Kondoa rock art sites are located on or near the Maasai escarpment (that marks the western edge of the Great Rift Valley in Tanzania). The sites are a series of rock shelters and boulders containing paintings mainly depicting elongated people, animals, hunting scenes, and abstract markings. Tanzania also has World Heritage Sites that are not rock art sites including: the Cultural Ruins of Kilwa Kisiwani and Ruins of Songo Mnara (1981); Stone Town of Zanzibar (2000); Kilimanjaro National Park (1987); Selous Game Reserve (1982); Serengeti National Park (1981); and the Ngorongoro Conservation Area (1978).

The Twyfelfontein rock art site has one of the largest concentrations of rock engravings in southern Africa. Most of these represent rhinoceros, giraffe, elephant, antelope, birds, and animal footprints. The site features an extensive record of ritual practices of huntergatherer communities in this part of southern Africa over at least two millennia.